At WORM in Rotterdam I recently undertook a short residency looking into the funtion of the Eurocord machine made by Klangfilm.

This machine allows a mono audio signal to modulate a focussed light source onto 16mm film to produce a negative soundtrack along the edge. 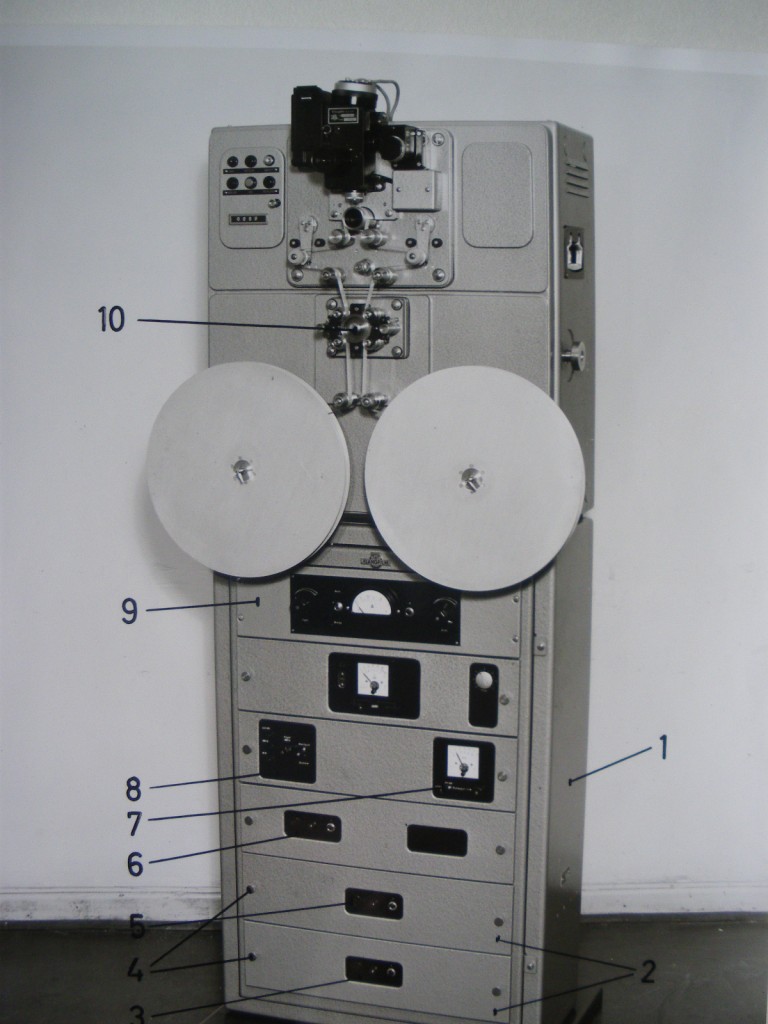 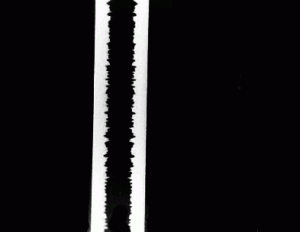 The machine is opearated in darkroom conditions as it is effectively a camera and I was using Agfa ST8 film for all my tests which I developed straight away.

Even though the developed films are negatives they still work in a projector or viewing table in exactly the same way, producing audio from picture. 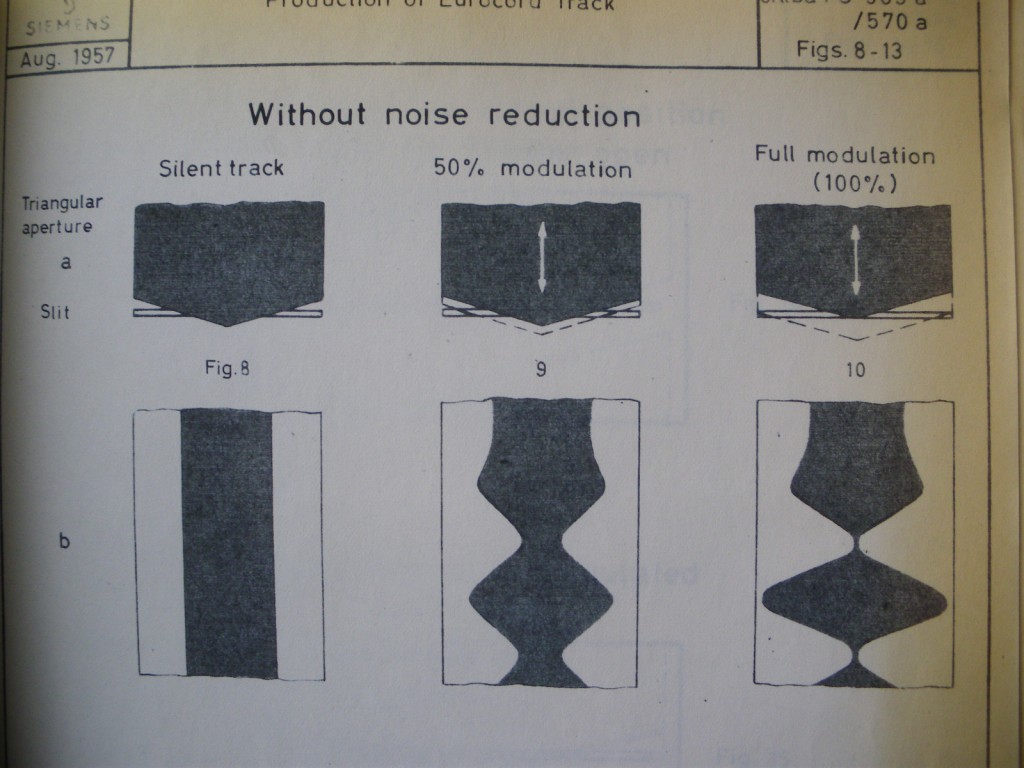 I wanted to really explore the potential of this recording medium in terms of frequency, properties, characteristics and also discover exactly how this process worked and whether there were parameters and aspects I could bring under a different kind of creative control.

I transported a small Vi set-up to Rotterdam on which I could compose and perform simple electro-sonic pieces directly onto the film. 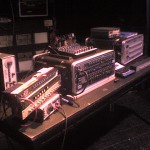 After making a few pieces this way I decided to experiment with normal camera exposure on the film, rewinding and adding sound.

A compelling result from this process is that after positive printing (also possible at WORM) one can produce completed sound & image 16mm films. There will be a loose sync if any, but this interests me as I typically work with both formats separately .

The Eurocord manual was luckily in English and I was able to learn some useful technical instructions and details. The frequency range for instance of this process is documented as 30 to 6000 cycles (hz). 30hz is a decent bass frequency and bass heavy passages of sound were working quite well being clearly audible on the viewing tables. 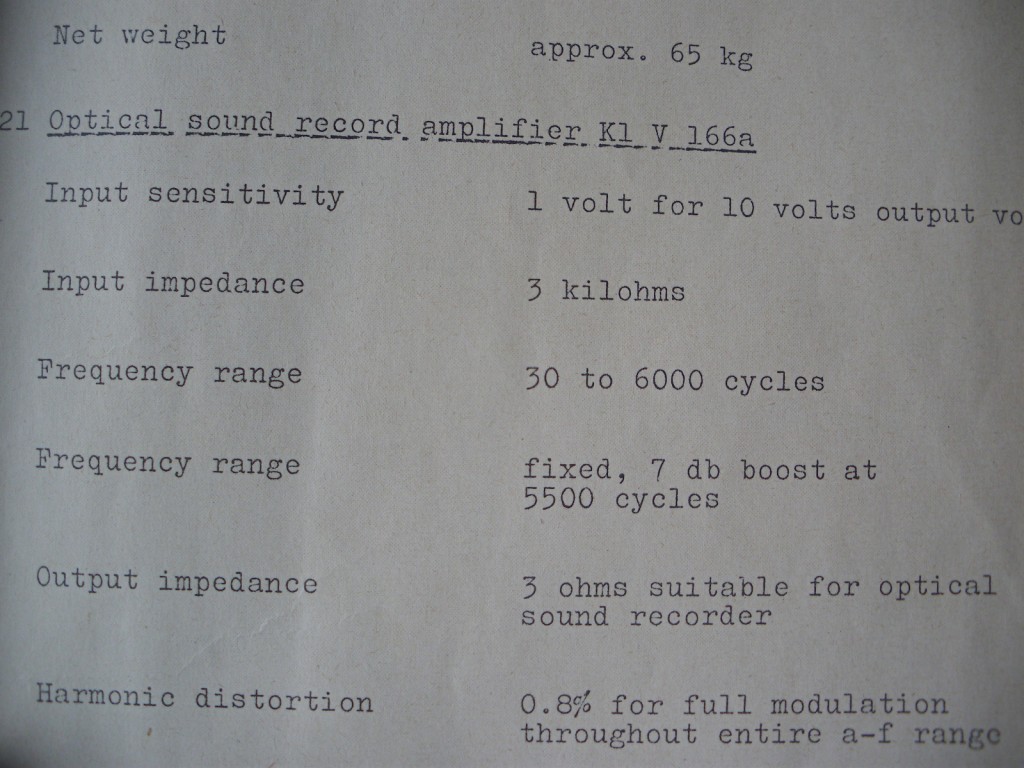 So infact the primary sound ability of this process exceeds that normally encountered in projection of 16mm sound; projection and various cell/light source alignment matters at the reproduction stage being extremely variable.

The actual optical-mechanical technique employed to get a sound source converted into a variable area soundtrack is worth some study as it is a marvel of engineering.

Below is description from the manual describing the process.

The soundtrack is recorded on the film by reducing (actually modulating) the size of a narrow stationary mechanical slit and with the aid of a lens  imaging the slit on the film as a thin line of light.

Here is the schematic from the manual. Normally books which cover this topic use simplified drawings so anyone specially interested in this system will find this interesting. 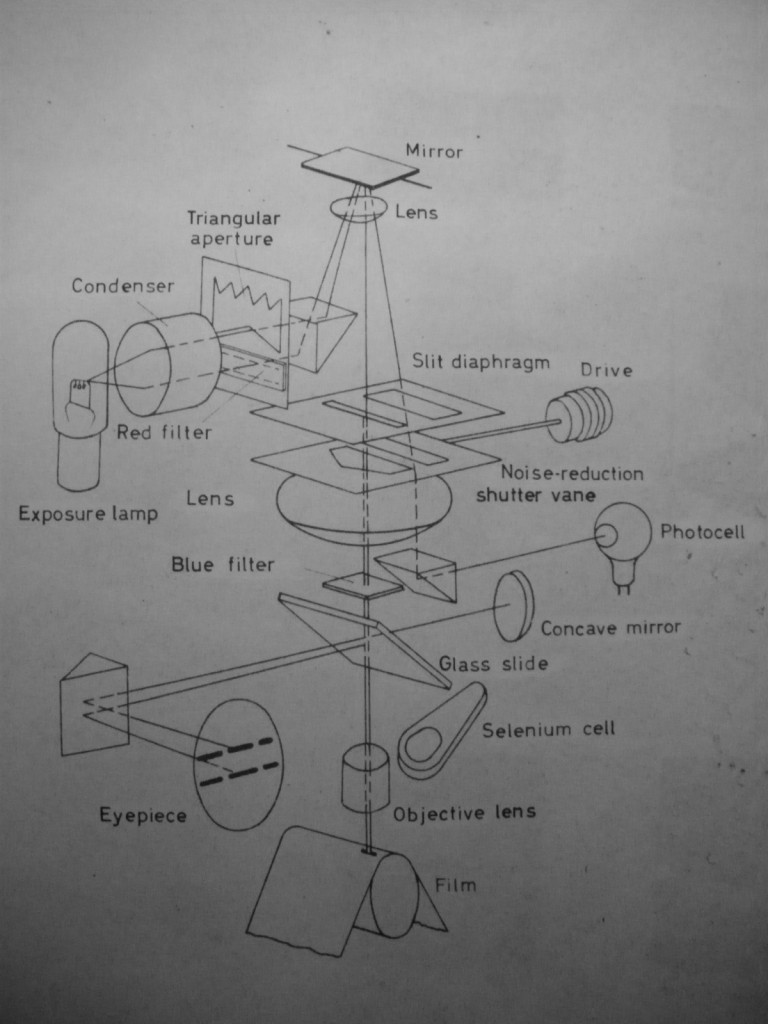 Infact the sound is projected twice, once inside the machine itself in order to decode the audio information and then again as moving air waves as it is produced by sound projectors or speakers as we normally call them.

What interests me in this process is when the sound image, the sound data, becomes the image. To explore this I needed to record the variable area track onto the picture area.

This photo shows the main function of the machine. The film is seen coming onto wheels #26, 25 and 24 before it wraps around the drum #23 where the recording takes place. The lens and light unit is above #22.

It then rolls down the other side, sprung roller arms #29 and 25 keeping the tension throughout the travel.

To get the light beam (very small) onto the film one can manually manipulate the film during exposure, effectively derailing the rolling stock and using the whole width of film to expose.

I made several films using this technique call and am currently working on making  positive prints.

Here is a link to WORM residency pages about my and other visit. 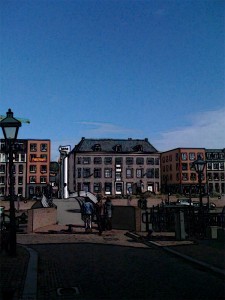 Also there is something interesting in the dualism of an intermittent movement and a continuous rolling which is how sound is reproduced. Sound is not interrupted in its passage by the need to ‘pull down’ to the next picture without being projected or seen.

Id like to make another trip to WORM to explore the Eurocord machine. There are more techniques to explore namely multiple exposures, simple ‘Finished’ pieces and manipulation of the imaging lens device to perhaps magnify and distort the waveform.

Links to other people/orgs doing cool stuff with optical sound:

Various SMPTE articles and other written histories and articles to follow.

CHACE quote on 16mm sound: “16mm optical sound tracks have relatively poor frequency response, (approximately 100Hz to 6kHz) and a rather limited dynamic range (approximately +3vu before distorting). This is due to the slower speed at which it runs: 36 feet per minute with only one perf per frame. Wow and flutter can also be an issue with this format.”