My MRES was practice based and I was looking at how to formulate an ‘Experimental Archive’ and what this could mean.

This MRES is now completed and available to read elsewhere on this website.

I am concerned with a certain kind of engagement with the archive because It is really films archival proclivities that interest me.

There are film archives because there were films that became records. A celluloid record if you like. We live in desperate times. As a film maker and artist who handles and works with film I am compelled to consider the need to continue contributing to this record.

Film is the memory of technology?

I also really tlike this idea that film and cinema involve other areas completely outside film/cinema studies, for instance certain kinds of metal engineering and fabrication and/or loco-mechnical techniques, or low-tech chemical engineering.

In some ways the entity (from archival science studies) is not merely myself and my personal interests. A focus on the 16mm format through the agency of the collective archive of ebay renders a kind of entity that is beyond my individuality and rather becomes the apparatus itself,  all the 16mm forms on ebay (and anywhere) being a materiological expression of that system of moving image production and its context and expressions in history.

In many ways this is an object orientated study as I am foregrounding the artefact, its modes of production, its properties and its proclivities to numerous contingent factors especially arrangement in series (the archive) and its appearance through projection (cinema). But this foregrounding comes with my anthropocentric ideas about use and expression and this lessons my interest in an ontology that might seek to define film ‘as inaccessible and infinitely withdrawn from all relations’  (g.harman).

Its precisely its relations to us through the agency of its relations within itself that constitutes one part of Cinema that interests me, and Cinema here would need redefining in terms of epochal reach, digital amnesia and the socio-political tyrannical capacity of technologies. 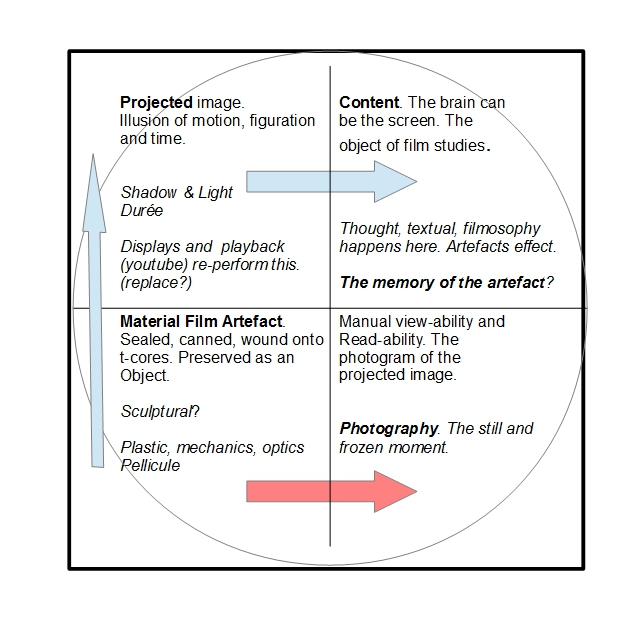 Also I am using NACHLEBEN in the Warburgian sense of ‘afterlife’ and ‘survival’.

Its my conviction that a classical analogue cinema (with sustainable digital/electronic augmentations)  could and should be established/preserved as a working system. The reasons are many and involve several core principles.

In the Warburgian (or formerly in Anton Springer) sense of the survival and afterlife of classical forms in creativity we confront the possible idea that any age produces its own  classicism. Revival, repetition, imitation and replication all function as  engagements with the past. Revival can only take place using the past, so classicism is always potentially being established for a future society and culture to rediscover. Its this current condition of Cinema, or rather its endangered classical preservation that concerns me. Without the system of this classic machinic-set  as a working instrument, ‘Cinema’ will gradually be erased by the commercially driven media/moving image scaffolding that constantly empties out the human dimension of the machinic in order to undertake (more efficiently anyhow) the programme of total capitalisation in accordance with global neo-lib-con ambitions. The partial completion of this project globally has already led to the depletion and dispersion of Cinema forms as classical. But the reason for this (the move away from analogue tools) is not a function of the wider media / technological landscape (of progress) that we are constantly being told it is. The reason is the break that cannot fully take place in the development of new (digital) tools (in Cinema)  due to exactly the ‘nachleben’ of classical cinema that keeps appearing. Take the argument over Netflix for instance.

Netflix is not the future of cinema because Cinema is public, social and shared

and Netflix is private, domestic and temporary.

The classical need for a public building, the Cinema perseveres, against all the odds and all the demands for us to atomise into personal screen spaces.

Another dimension of my use of ‘The Archive’ is informed by cultural memory studies, namely Aleida Assman’s mapping out of how cultural memory gets remembered and forgotten (Canon and Archive,  Companion to cultural memory studies 2010 ) but I attempt to place the ‘archive’, suggested by her as ‘passive remembering’ also as ‘neglect and disregard’ which for her are forms of ‘passive forgetting’. As some film materials I am planning on incorporating into the archive come from eBay they could be defined in these senses.  They are dispersed, material relics (her words) but the important thing here is that I am collecting them as a way of saving and restoring them. Not restoring in the sense of  re-filmic operations but rather restoring their place as memories, in the Archive which nevertheless records their origination from neglect and disregard. 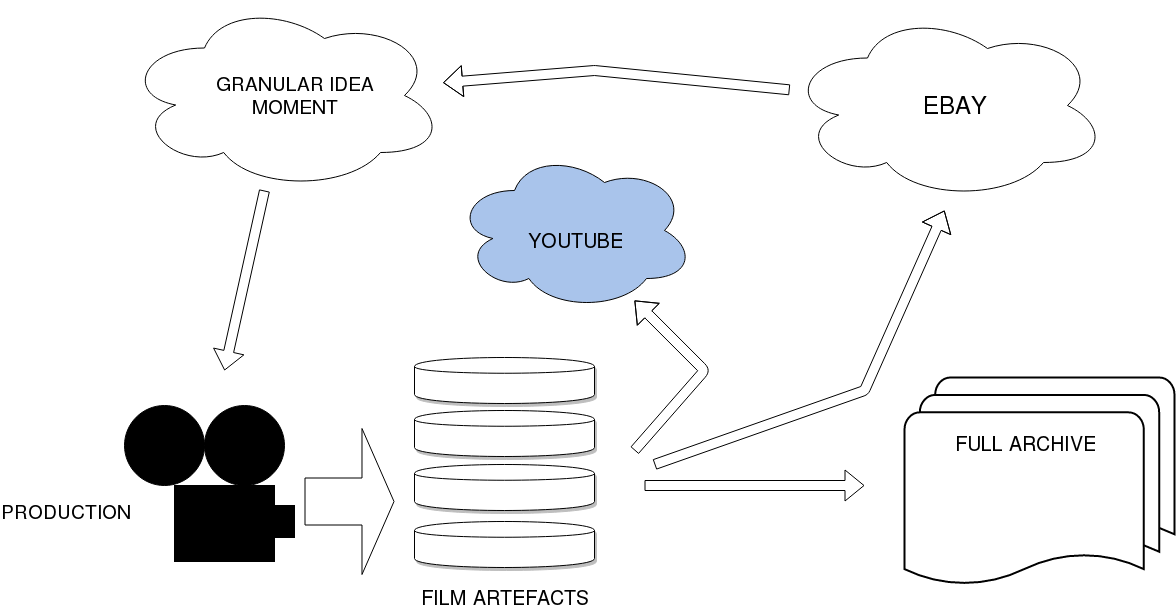 Here is a basic account of one aspect of my creative practice in diagrammatic form.

Ideas arise within a mental platform I am labeling Granular Idea Moment.  This really an attempt at producing a material account of the formation of ideas (for films).

If suitable, ideas are executed in their production. The production outcome is a film artefact.

The artefact undergoes an arrangement, OCN and 1 POS print are added to the Archive.

The 2nd POS print (1 of 2) goes for sale on eBay, one type of ‘cloud’  archive,  dispersed, expansive, public, networked (although propietry).

It may or may not be displayed on youtube, another type of ‘cloud’ archive (as above).

Really the Granular Idea Moment is another way of thinking about the material development of ideas, how they arise, pop into our heads, form over time, come to us in dreams, emerge out of writing, etc.  These are made possible by a fairly rigid and rigorous ‘project format’ outline that defines the ‘spirit’ of the films that I want to see made, or perhaps would be most interested in seeing myself in the future.. It does this by a series of properties and markers that consist of things like:

When an idea arises that seems to fit several of these checks, then I make a note of it. Usually, or at least so far into the process, ideas arise in a complete form, almost like dictates to me from someone else.  This process is of great interest to me. Is all creativity collective (Deleuze & Guatarri) as ideas arise out of the sub-conscious which itself is always collective? If so then even within a reading that says that any idea is a programmatic response to the material format it must inhabit (to some degree) it still contains ‘imagery’ that cannot be predicted so easily and must come from a collective ‘pool’ of desires, memories, visions, dreams, experiences,  etc.

It is my contention that a ‘working system’ can produce new cultural forms, configurations and histories if it is subjected to a specific programmatic design. This design is under Artistic control, creative exploration and invention, as was and has been ‘Cinema’ for all its life. Therefore something like ‘The Cinema Building’ itself, its agency as a social, community and public actor is a highly specific thing if it maintain 35 and 16mm projection and  the means to work in these mediums is available to participants.

For eg, here is a note to myself, from the perspective of the future where such an event has happened in order to inform and inspire the present moment where it is only a design (or desire).

The film, on the big screen has been made by local people.

There is no sound on this one so an orchestra provides the music.

Next time there will be sound.

Its like a silent movie. Black and white with bits coloured in.

But its not apeing old movies. Its about the river and peoples relationships with it.

The projectors whirr into life.

There is a talk afterwards about the film and how it was made.

There is a talk about film projection as an art.

An art that helped formulate ideas in the film.

We look at the film wound up into a cake.

It is b/w positive. We see the negative, its has splices where it has been joined.

It was printed from negative to positive on a machine that is 100 years old.

Different cameras were used to shoot bits of film, a 16mm bolex and a 35mm mitchell.

A thing called an optical printer was used to blow-up the 16mm stuff to 35mm.

All kinds of tricks, from double exposures, to matte paintings, to freeze frames, to miniatures are used.

It was all hand developed in hand made tanks in stuff called caffenol.

Thank you for coming.

Next months pre-production meeting is about the theme:

‘Landscapes in hallucinogenic experiences under the influence of Fly Agaric Mushrooms’