Im trying to devise a way of describing flicker that is mathematically accurate.

Frame rates as we understand them for example 24fps or 18fps are only one aspect of the whole picture delivery system. Firstly, often a frame is delivered twice, or three times so this produces a different phonomemalogical  figure, say 48fps. But this figure only counts the light portions of the flicker. If we count the (2 here) dark portions we now get another figure, 96hz, where I am now using hertz as the measure of regular intervals.Secondly frame rates are expressions of a previous event, the capture rate for the camera. So even though the frame rate is 24fps for example, the visual flicker phonomena is more involved.

There are 4 ‘events’ per second , giving the figure 96 worked out thus

But this becomes problematic in silent film where the FPS figure is dynamic, or irregular, ie it changes very subtley over time.

The top one has a very uneven cycle. If we expressed this blade in terms of percentage of time open and closed it would look like this: (I always start with open on a new frame)

Yes, we could say there are 6 events per second (also per rotation) giving us the figure for example for a silent film hand cranked at about 12FPS of 72hz.

In this blade though (interestingly) the total light and dark ratio is actually 1:1. If you add up the percantages you get 50% open and 50% dark. We know from other experiments I’ve done that modern blades on both 16 and 35mm projectors commonly have ratios of 3:2, light to dark, ie there is more light. This is what we want after all, more light, more image, better picture.

So this blade shows us in its form what the designers and engineers were thinking. They were perhaps stuck with thinking a 1:1 ratio was necessary but they experimented with different sized openings to increase flicker, including a very small light opening portion at step 3 above at 8% or 32 degrees. They also blocked out a large closed portion at 24% to possibly allow for turning of the intermittant. Im not sure as I’m away from the machine presently.

What is remarkable though is how ‘transparent’ this blade appears when you hand crank it and look through. You can see this in the bottom video.

So this descriptive form would be something like this 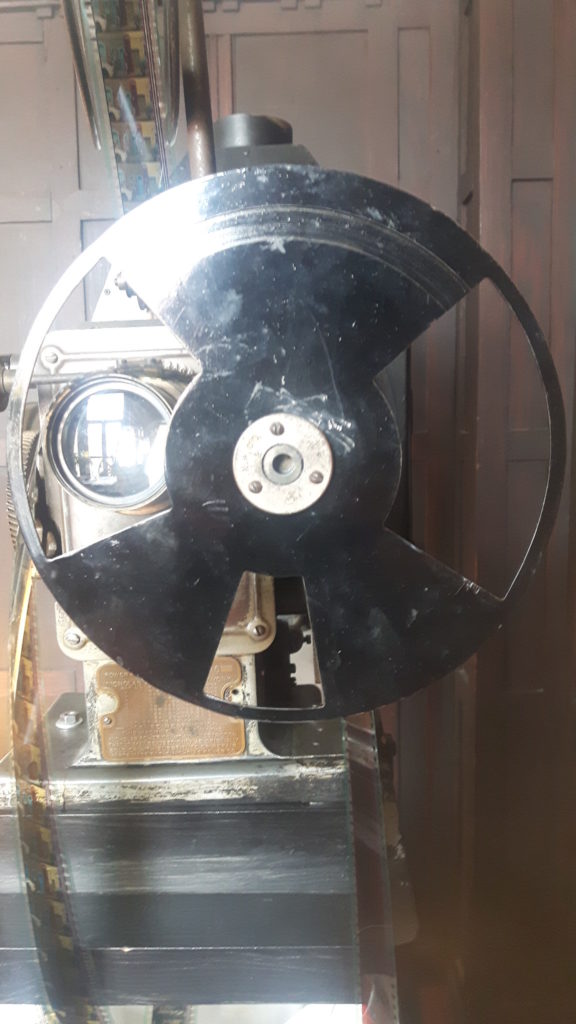 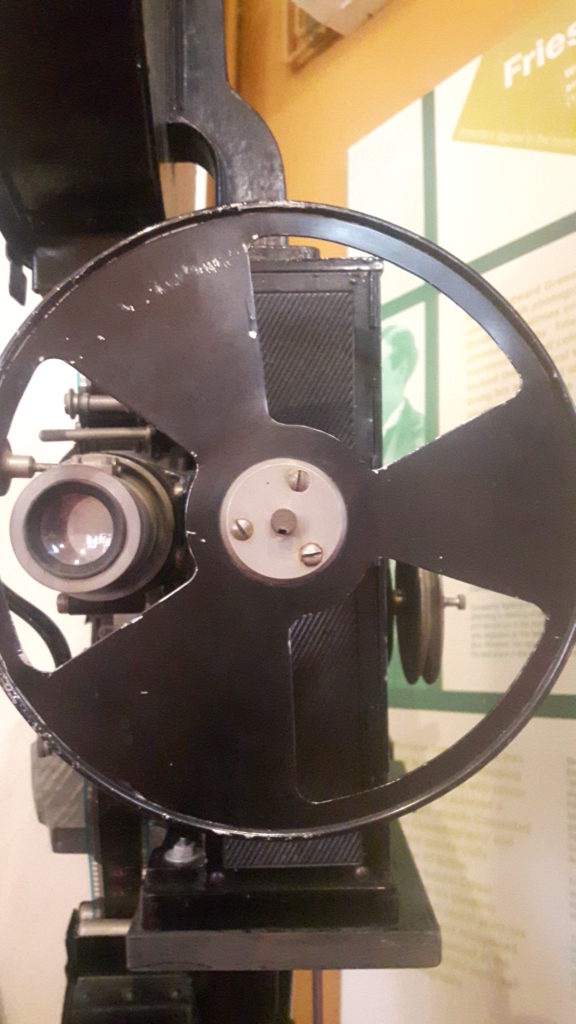 To delve into these problems more precisely Im going to have to learn about angular frequency and things perhaps like Radians and ‘turns’.

Also, I want to bring in the camera blade into this at some point. The camera blade as we find it in early film cameras is a much more sophisticated system than the projector blade.  Firstly it is adjustable in real time. It can open and close whilst the camera is running which will change the exposure (say, creating a fade out) and but also the shutter speed resulting in say less or more ‘motion blur’. Early engineers and designers would have know its benefits and uses but this highlights the difference between capture and display.

Another key departure point between the camera and projector is the pull down method. The technique used to advance the film through the gate. 35mm cameras were often designed to run backwards. This feature was afforded by the fact that pins and claws were employed to make the transport happen and these contact points with the film worked well in the opposite direction. With a variable blade and bi-directionality we have a basic visual effect, the lap dissolve. FIlm with a fade out. Rewind film covering lens. Film on same piece of film with a fade in.

The projector however is typically employed in a strong forwards mode. Common 35mm intermittants (all the way upto modern ones) are turning gears which do not work or do not like to works backwards. They pull the film forwards but cant really push it back.

The 16mm transport system that we find in modern portable projectors (EIki/Elfs) however is a claw type mechanism. This method does work in both directions very well as I try to employ to creative and artistic ends with a projector that has been specially modified for me by an engineer.

In some ways, after the advent of the electric motor, we see a kind of ‘lock’ occuring to the visual system. This lock acts both as a standard to afford all of Cinemas producitons but also as a kind of base normaliser, or episteme even?

A reversible projector could be regarded as a different episteme alltogether from the one that underpinned 20th century film/cinema? Creative uses of a reversible projector in turn inform and message what is made with the reversible camera and almost certainly how the optical printer mediates in the centre of this axis.

In the reversible projector we see a different time. We experience an alternative mode of time form the one that is ‘motor’ driven. We still experience it IN TIME, but there now appears a sense of longer, almost timeless moments. A time that reveals hidden experiences that are covered over by the passing of time. Not the frozen image or the death still, revealing a synedoche of a given whole, but a dymamic anti-time that sheds and grows its skin of time during the experience in direct contingency to the time we think we are perceiving.

What is behind this in some way is an attempt to consider cinema from the POV of the electric motor. If we see the axis of mechanical expression as having its first system in cinema in the link between the hand cranked camera and the hand turned projector (not forgetting that electrical machinery must have been employed in the factory to engineer metal parts and machines) we see its end in the employment of the electrical motor as a ‘strictly governed’ device, ie a device that was under a ‘restriction’ to its creative freedoms. Filming speeds have been creatively employed from early on (high speed to stop motion) but projection motorisation has needed to be a standard in order for all other effects and applications to come into realisation.  The operation of the projector in expanded cinema (in a modernish sense, ie since the 1960’s) has done much to reverse this bias but its still possible to see the motor as an unquestioned rule that receives very little attenton in itself (exceptions would obviously be Bruce McClure and others).

What also interests me is the relation between the ‘work’ of hand cranking and the ‘work’ that the electrical motor ended up doing for us. For example in a common 16mm projector the motor is 500 watt (.74 HP) which equates to the work an athletic cyclist produces when they pedal.